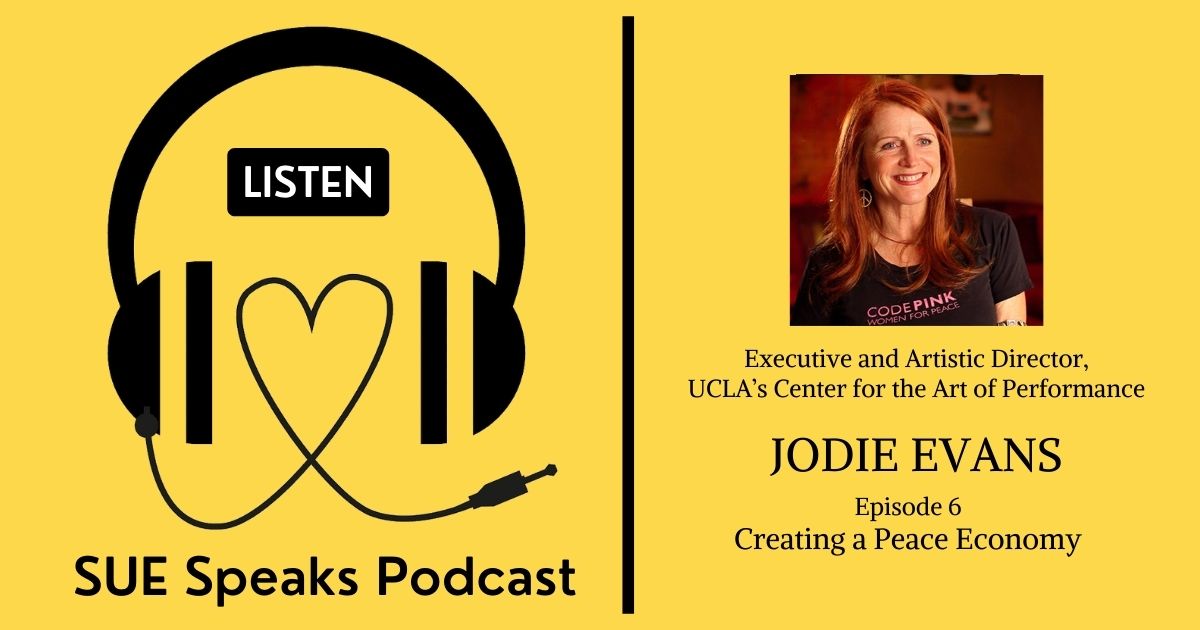 Seeing what a big world it is out there, I’d understand people being skeptical about my evaluation of Jodie Evans, but that wouldn’t shake my conviction that if she wanted to she could become the president of the U.S. If America knew her, I bet they’d elect her. She would be the one we have been waiting for, who would get us off our primitive commitment to making war.

Peace is her game and she has all categories covered. A political activist, author, and documentary film producer, comfortable from board rooms to war zones, she’s smart, historically astute, well-informed, beautiful, gracious, and kind. Best if all, she doesn’t want power. I met Jodie in the early ‘90s when she was Jerry Brown’s campaign manager and I hosted breakfasts for this maverick politician who early on was preaching environmental awareness and campaign finance reform. Some 40 years later, on leaving his second round as Governor, he appointed Jodie to the California Arts Commission that she helped him found during his first term from her advocacy for art as what ennobles the human being. She’s most publicly known as a founder of CODE Pink, a women-led grassroots organization working to end U.S. wars and militarism that was started in an effort to prevent the US invasion of Iraq.

To know Jodie is to love her. She has a warmth that doesn’t stop. You can see it. She shines. She gives herself to so many causes that it doesn’t seem like one person could do all that. However, when a philanthropy organization we both belong to gave her a 3-year term as its president, she did the kind of job you’d have thought was her only one. She is our mother hen, hatching a new society where we radically reimagine and transform our relationships so they are defined by love, by care and compassion and sacredness, by the qualities that nourish our souls and enrich our humanity.

Your Friday DELIGHT: What I Would Do if I Ran the World. Here’s the spirit. It’s a previous Delight. We start with food, shelter, education, and health care for every human being on earth. That would create the playing field. Here are the merits of UBI in my program to introduce it in L.A. when hardly anyone knew what UBI was. Thanks for passing these Delights to your friends! suespeaks.org/a-delight-a-day/ ...

Share on FacebookShare on TwitterShare on Linked InShare by Email

Searching For Unity In Everything@_SUESpeaks·
6 Sep

Your Monday DELIGHT: Sounds of the #Soul - The Contribution of #Jewish #Music. This is wonderfully entertaining for everyone. Thanks for passing these Delights to your friends and a happy hello to new subscribers! https://conta.cc/2Ylc5Yn
https://www.youtube.com/watch?v=rToAwMfKOLg