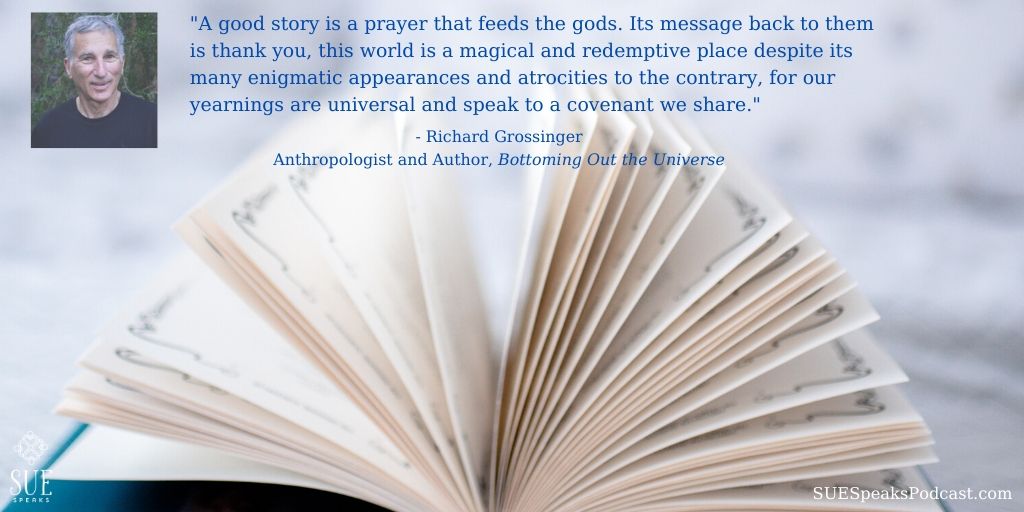 Richard Grossinger is an extraordinarily perceptive person about the very basic questions of who we are and what we are doing here. His knowledge ranges from what’s academic that he got from what’s been written, to what he’s learned from working with many body-oriented therapeutic modalities, to who knows how he got insight into deeper and broader issues about consciousness that books and science don’t address. He and I have known each other for a very long time and have had many profound conversations about the nature of reality, about which Richard has written some 40 books. The most recent one is a rewrite of The Night Sky, a major book he wrote decades ago that now, after years of living have fleshed out his understanding, he considers to have been notes for the current version. Brian Swimme, my last podcast guest whose story of the universe is the one I cotton to, said this about the new version of The Night Sky:

“Richard Grossinger’s new book, The Night Sky, should be heralded as the publishing event of the decade. This is a book that has the power to change your relationship to the universe. I would even say it has the potentiality to participate in the evocation of a new civilization.”

It’s now been a few years that Richard has been working on his next book, Bottoming Out the Universe: Why There Is Something Rather Than Nothing. In this podcast, you’ll get the jump on its pending publication when I probe Richard for the current thinking of one of the most important voices on the planet. It’s good material to prompt listeners to give their opinions on our relationship to the universe. I’ll engage with your comments and so will Richard!

This takes your breath away. The country will be consumed by getting the bastard for a long time. Is that what we want? All of us ingesting that swill every day? I'd like some conversation about thinking outside the box, where I'd see Trump being off the hook for all prosecutions if he did a convincing mea culpa about his crimes. Why would he do that? To stay out of jail and to keep his money, and I'd even see him taking pride in having released his followers to unite the country, which is a much more important thing to do than to bury our thug President. Really, to get our pounds of flesh we'll have years of his dominating the news that wouldn't even touch his followers. Can we talk about doing something like that? ... See MoreSee Less

Searching For Unity In Everything@_SUESpeaks·
9 Aug

Roger Waters on War, Peace, and Music https://youtu.be/nx1xkxiDPhk via @YouTube. This is the best. @rogerwaters got 800 people to a Zoom. Get more celebs to do things like this to rally all people of goodwill to save the world.