These blog posts form a collection. They are a treasure trove of food for thought to spark conversation. So, grab a cup of consciousness, tour around, chew on some tasty transformation, and let’s talk! 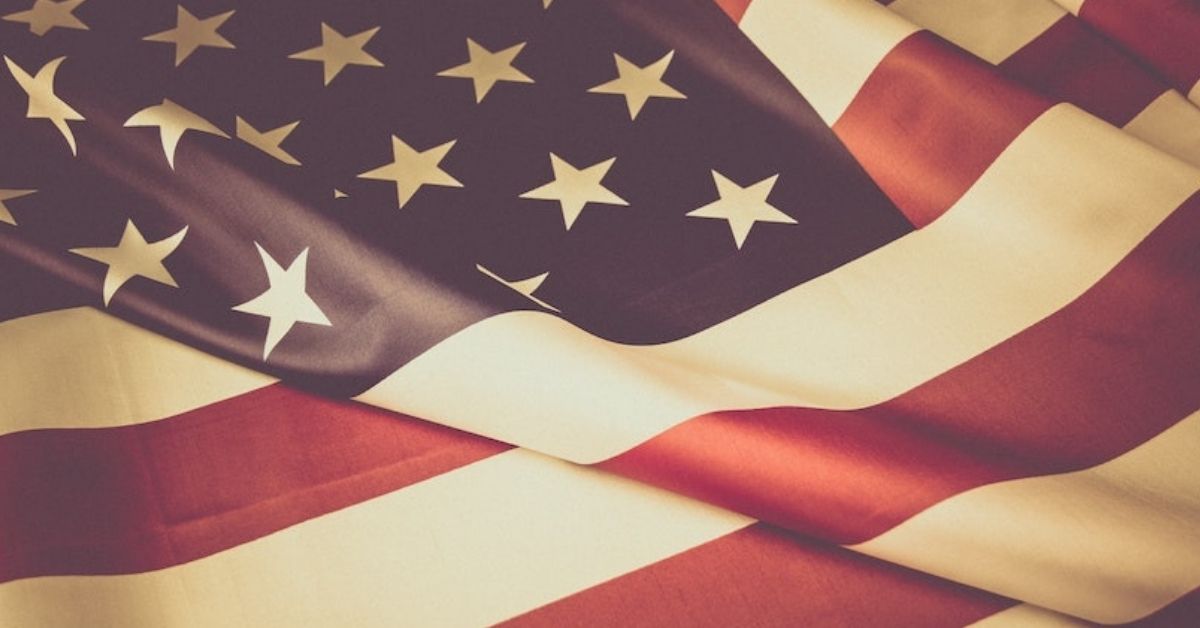 This is a basic read from TomDispatch. All that imperialism we didn’t pay attention to until the second Bush brought it into public view is very clearly spelled out here and was helpful to me. There were no comments accepted and I wish there had been. What to do in what is an impossible impasse of endless war is what I’d speak to. I’d say we can’t end war from the consciousness that created it and a sweeping change of basic perception is the only solution. How to pull that massive change off? Bring everyone in the world up from poverty — a sort of UBI for every person in the world. That changes the playing field. Then, a campaign worldwide for kindness. It’s easy to do and keeping it in people’s awareness could be all it would take for the whole tenor of the world to change. Kindness is love in action and love as the playing field would be the realization of our true nature and our ultimate possibility.

“War, what is it good for? Absolutely nothin’!” So went the famed Vietnam War-era protest lyrics first sung by the Temptations.

Looked at a certain way, however, like so many Americans, war has been the backdrop of my life. After Pearl Harbor, my father, 35, promptly volunteered for what was then the Army Air Corps; my mother, a cartoonist, would, in her own way, mobilize herself, too; and I would be born in war-time 1944 (on the day, as it happens, of the failed officers’ plot against Adolf Hitler). My father had, by then, returned from duty as operations officer for the 1st Air Commando Group in Burma. (His own commander, Phil Cochran, would be made famous as Flip Corkin in Milton Caniff’s popular comic strip Terry and the Pirates.)

END_OF_DOCUMENT_TOKEN_TO_BE_REPLACED 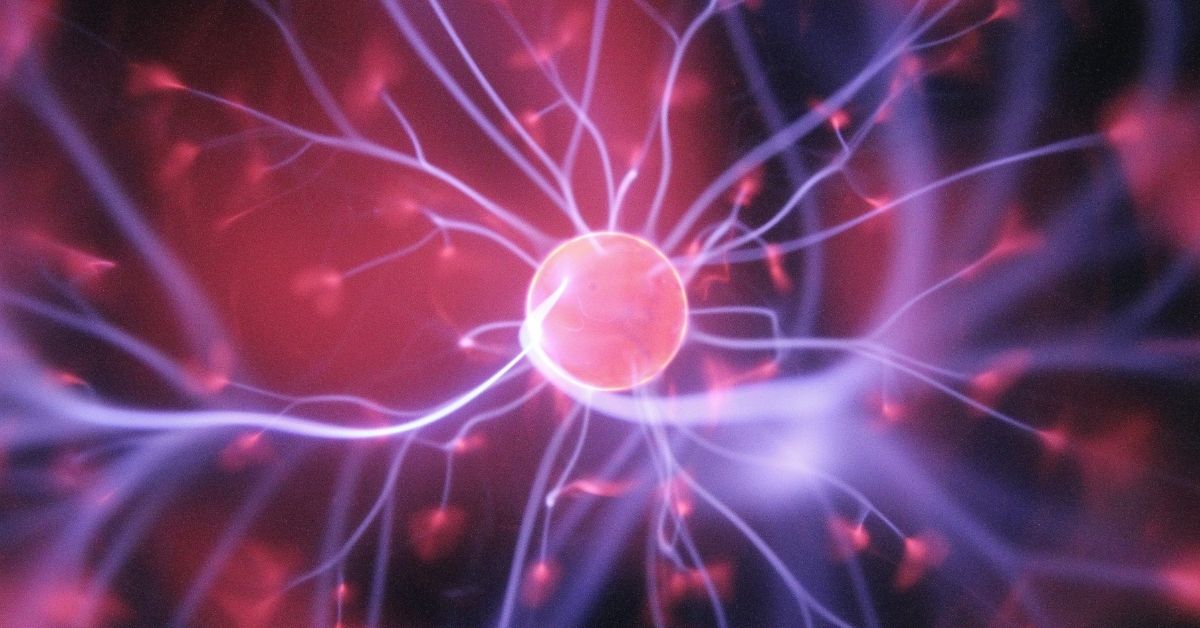 “Our healthcare system is great at fighting disease retroactively, but it’s dismal at keeping people healthy proactively.” We are so backward still in the contracted, materialistic world we create. This is intelligence from beyond that, which is where we need to be coming from in the great shift of awareness we are on the cusp of making.

America was sick before COVID-19 struck. The pandemic has made our national sickness more acute and illustrated the critical importance of “wellness” in preventing disease and optimizing health. We know this because COVID disproportionately affected people with chronic illness and unhealthful lifestyles.

As a scientist who has worked at the leading edge of medicine, engineering and genetics for decades, I’m on a quest to give mind and body wellness the scientific rigor and urgency it deserves. No doctor, policy or breakthrough drug is as effective as “wellness” at minimizing disease and enhancing the length and quality of life.

Read more: Op-Ed: Getting past disease to the science of wellness | The New York Times

END_OF_DOCUMENT_TOKEN_TO_BE_REPLACED 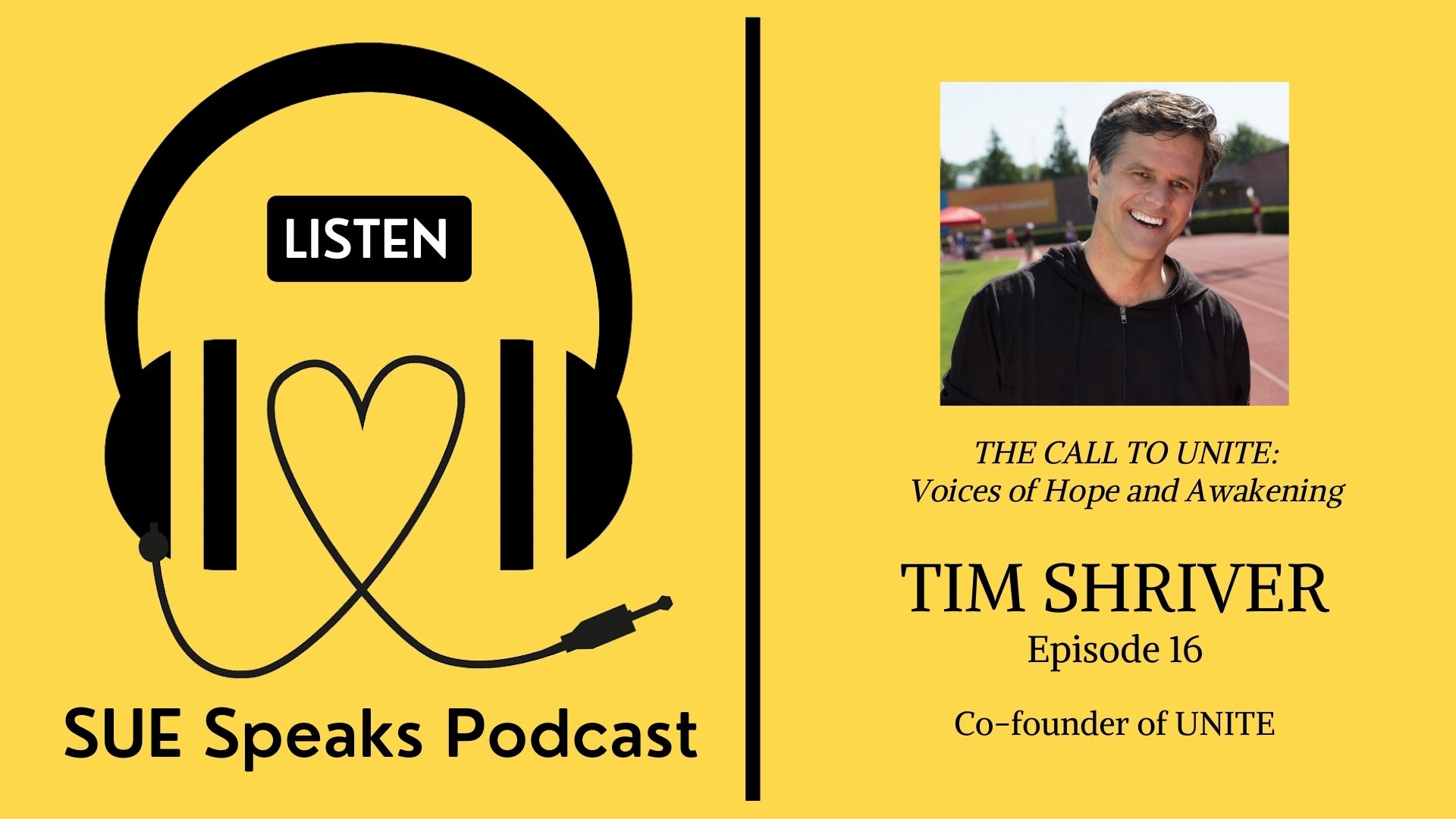 We were fortunate to have Tim Shriver as our guest on our 16th episode to talk about THE CALL TO UNITE: Voices of Hope and Awakening, that he co-edited. It was put out as a book after a 24-hour online program, The Call to Unite, featuring more that 200 of the world’s most inspirational political, cultural, and spiritual leaders inspiring the audience to answer the call. This beautifully designed book has more than 100 first-person short stories, from celebrities and from people you never heard of, all of whom will inspire you with how “only in coming together can we be our happiest and our best.”

Tim is an evolved soul who works on projects that UNITE, which is the name of the enterprise he co-founded. I urge you to visit his very fine website to take his invitation to​ ​join the movement on his homepage. A HUGE YES from me. Go look!Projects that UNITE has a significant hand in:

For icing on the consciousness cake re UNITE:

I unabashedly request that you listen to the podcast for tuning into the keenest intelligence as well as the loveliest soul trying to bring about the sense of community that we so vitally need.

END_OF_DOCUMENT_TOKEN_TO_BE_REPLACED 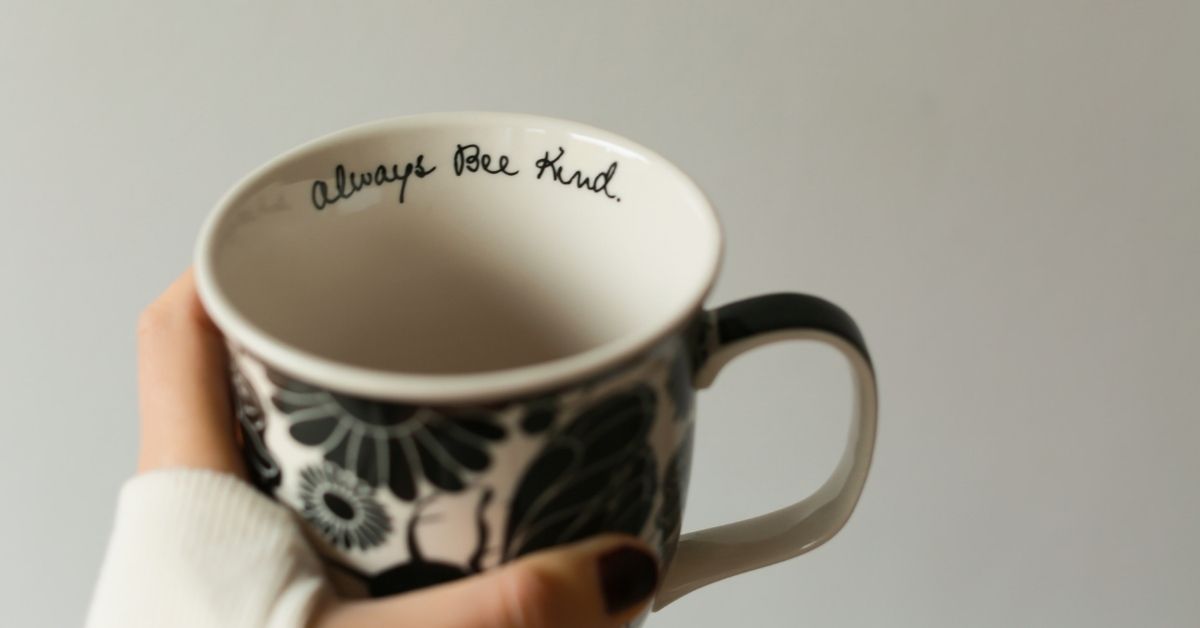 Survival of the Kindest got me thinking even more enthusiastically than I already have been about the possibility of a kindness energetic saving us.  The enthusiasm for kindness is bubbling up everywhere, and I bet the whole world would come into a new worldview, where we care about each other as much as we care about ourselves, just by amping that up. Get ad agencies all over the world to make campaigns for it, with the idea that all it would take to get massive results is reminders and encouragement. My prediction is that the warm feelings that simple acts of kindness would evoke would be just the fuel for the paradigm change we so urgently need. Watch a short video I made for a little inspiration about practicing kindness.

More experts are arguing in favour of human compassion, writes Julian Abel.​ ​At the same time as Rutger Bregman published Humankind in 2020, Brian Hare and Vanessa Woods published Survival of the Friendliest. Their work as evolutionary anthropologists has shown how friendliness and cooperation have been a driving evolutionary force that meant Homo sapiens predominated over the other many species of hominid.

END_OF_DOCUMENT_TOKEN_TO_BE_REPLACED 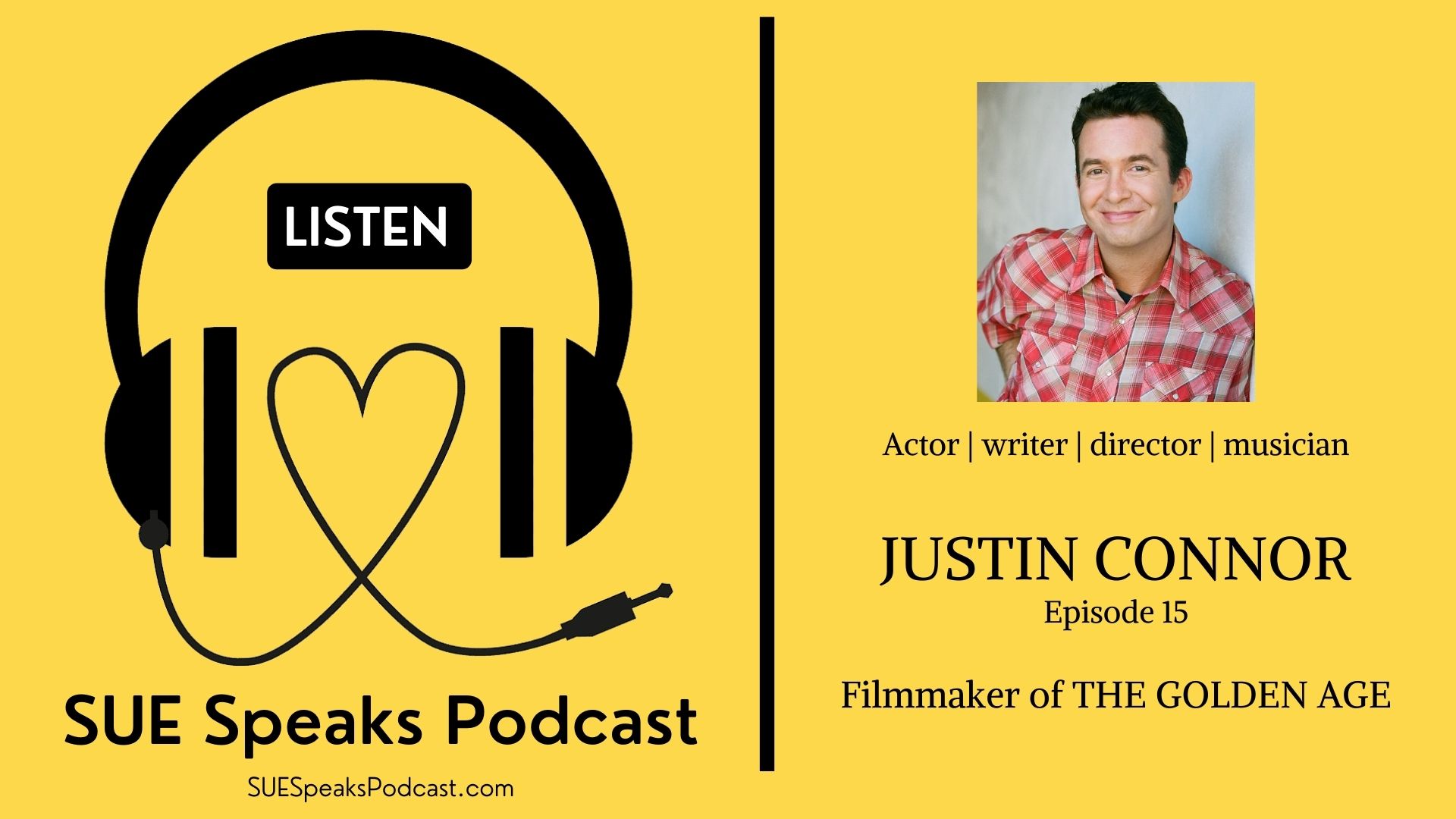 I hope this entertains as well as illuminates. Although you can watch The Golden Age after you listen to my podcast with writer, director, composer, producer, and star, Justin Connor, you’d have your own experience of it to bear in mind when you hear us talk about it if you’d already seen it. This is a movie for our time, and the glowing reviews that are on Amazon Prime let you know why it should be seen.

Justin is a wonder with his prodigious artistic talents and his evolved state of consciousness. Art helps us make sense of the world, and, at this explosive time of rethinking, needing all the sense-making we can get, my conversation with Justin looks to artistry in the world to come.

With the entertainment industry under such threat now, where the ways of the past may never be in our future, I welcome any thoughts about where to from here to add what Justin and I have said.

END_OF_DOCUMENT_TOKEN_TO_BE_REPLACED 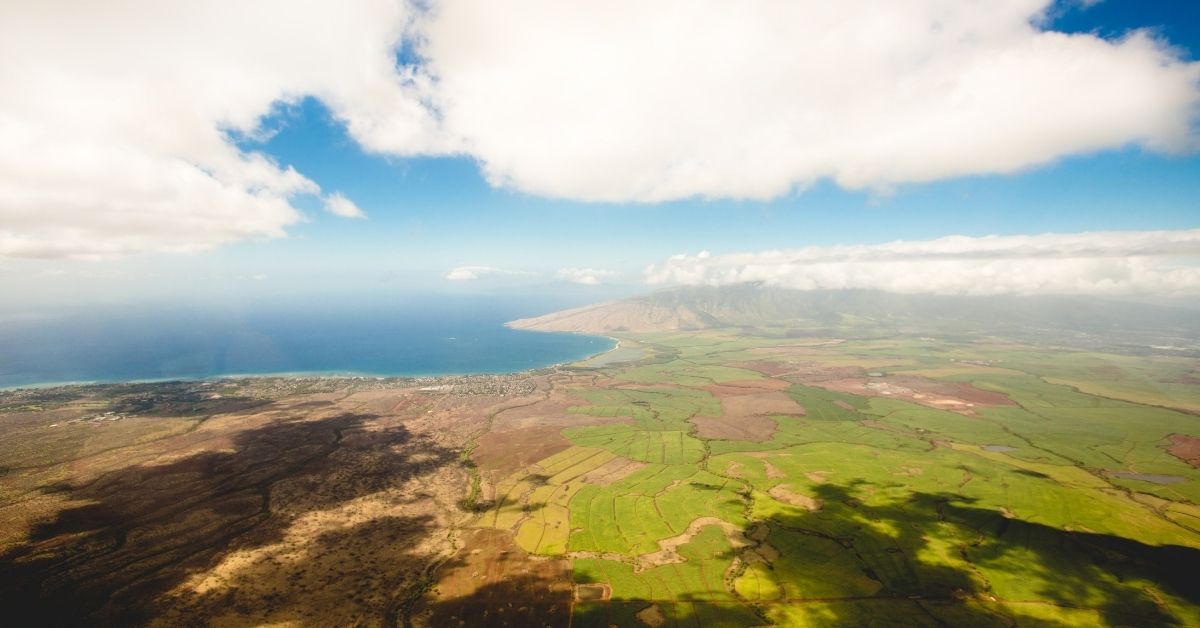 It’s time to reinvent the world. We are so unraveled that we’re in good position to start over.

What’s primary is to move into a worldview where caring about each other is as important as caring about ourselves. Without that, it’s moving deck chairs on the Titanic. A world operating on humanitarian values will best let us address all that ails us.

What’s I suggest is that first on the reinventing agenda is bringing everyone in the world up from poverty. A declaration we’d go to the moon was what mobilized that effort. How about a declaration that it be a fundamental right of all human beings to get housing, food, education, and health care? Everyone, everywhere. And, to do it much faster than getting us to the moon. This is a decision to be made and not a technology to be invented, so getting minds changed is what we need to focus on. In Grunch of Giants, in 1983, Bucky Fuller wrote, “I do know that technologically humanity now has the opportunity, for the first time in its history, to operate our planet in such a manner as to support and accommodate all humanity at a substantially more advanced standard of living than any humans have ever experienced.”

This is a necessity NOW. Global warming is not a political issue and COVID could be relatively minor by comparison. The virus will ultimately be handled, but humanity having any future is what’s at stake with global warming.

We need government to take people out of poverty, but changing our worldview also can come from the influence of the private sector. We need to be creative.

These are two things we could do:

HUMANITY’S PARTY OR THE TEAM OF HUMANITY
All who identify as being on the side of humanity would make a huge force. Get signatures.

FOCUS FOR HUMANITY — THE MINUTE OF SILENCE
Every day, at the same time in each time zone, millions of people spend a minute focused on kindness.

Scientific studies show that prayer can affect the material world (The Power of Prayer to Affect the Physical World). Kindness flooding the world could turn us into a caring people, while the focused intention we’d be employing, if we have success, could become something to employ to achieve other objectives. It also would very publicly demonstrate the scientific relevance of what’s outside the box of scientific materialism, to finally achieve success in advancing our concept of science, bringing it from the Newtonian perspective of everything being cause and effect into the quantum world where the soul dwells.

This stainless-steel cooking spoon is testimony to thought being able to affect the material world. There were no tricks. A friend of mine focuses his thoughts and bends spoons of any size, one after another. 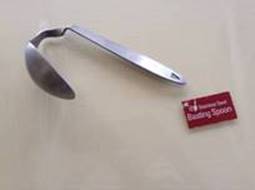 What do you think of my ideas?  What are other ideas to get humanity working together, creating the world we’d like to be in? There is no more important question to address.
END_OF_DOCUMENT_TOKEN_TO_BE_REPLACED