Leslie Kean, one of the SUE Speaks heroes, is central to this story.

“The New York Times piece hinted that they actually have recovered materials. So when those facts might spill out, we might get material confirmation there’s something going on. Until that time, until we have credible scientists telling us this material is otherworldly, I think short of aliens visiting us, that will be the next revelation…Imagine the impact on religion. On belief. You can throw so many things out. Certainly our anthropocentric view of the world.”

“Now that this story has come out, it is some validation,” Fox showrunner tells EW.

END_OF_DOCUMENT_TOKEN_TO_BE_REPLACED

The elves who are busy shifting our worldview were so happy to have found this NY Times Op-Doc video by Matthew Salton. I love, love, love this 6-minute retelling of what Santa was up to! 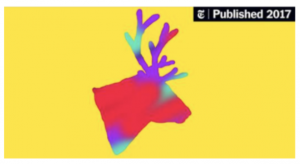 Santa Is a Psychedelic Mushroom
It’s time to embrace the shamanistic side of Christmas.

END_OF_DOCUMENT_TOKEN_TO_BE_REPLACED